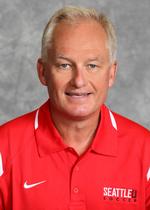 In 2018, Pete Fewing will enter his seventh season as head coach of the men's soccer team in Division I play and 25th season overall at Seattle U. In his SU career, Fewing has won 289 games.

Fewing led the Redhawks to their third WAC Championship in 2017, as SU won an NCAA Tournament match for the third time in five years. After claiming its third WAC title since 2013, Seattle U went to Washington for the first round of the NCAA Tournament. Gabriel Ruiz scored in overtime to lift the Redhawks past the Huskies and send SU to Akron, where the Zips advanced to the Sweet Sixteen.

Fewing oversaw SU's nation-best 21-game home win streak, a string that was snapped in September. The Redhawks turned around and started a new five-game home unbeaten streak to close the regular season. As the third seed in the WAC Championship, SU had to win three games in five days. It beat CSU Bakersfield and then advanced past host UNLV in penalty kicks, as Josh Adachi made a pair of saves in PKs and Cody Buchanan scored the clinching goal to send the Redhawks to the final. Aune and Roldan both scored in the title contest as Seattle U claimed its third WAC Championship in the last five seasons.

Under Fewing, the 2016 edition of the Redhawks posted an 11-win season. They went 7-0 at Championship Field, extending their home winning streak to 16 games-the longest such streak in Division I. SU finished second in the WAC regular season standings and claimed victories over regular season champion Utah Valley (2-0 on Sept. 30) and WAC Tournament champion UNLV (4-1 on Oct. 27). Fewing guided Seattle U to its fourth consecutive WAC Tournament appearance. Fewing's squad landed five players on the all-conference teams, including WAC Defensive Player of the Year Kyle Bjornethun. Along with Bjornethun, Alex Roldan and Sergio Rivas were both All-WAC First Team, while Nathan Aune and Sam Langston were both All-WAC Second Team.

2015 was a history-making year for the Redhawks as Fewing led the team to their first ever Division I Sweet 16 appearance (at Syracuse) with a win vs. No. 25 UCLA in the Second Round. Also a first, Seattle U hosted their first ever Division I NCAA game on campus in the defeat of the Bruins. Seattle U was ranked in the NSCAA Top 25 for eight straight weeks, from the end of September through the end of the final regular season poll and Fewing was named NSCAA West Regional Coach of the Year. The Redhawks earned wins vs. No. 10 Washington and No. 13 Oregon State, most notably, as well as versus the Ivy League's Harvard and Dartmouth, earning 10 shutouts over the season.

In 2014, Fewing coached the Redhawks to their second straight WAC tournament appearance in as many seasons in the conference, which the Redhawks hosted on their home field. Individually, Ian Hines-Ike was named First Team All-Region while Hamza Haddadi and Kyle Bjornethun were named to the Second Team by the NSCAA. Academically, Fewing led the Redhawks to the program's first NSCAA Team Academic Award in the Division I era for posting over a 3.0 cumulative GPA for the 2013-14 school year.

The 2013 season was one for the record books as he was named Western Athletic Conference Coach of the Year, taking the Redhawks from an 0-6-1 start to winning both the WAC Regular Season and Tournament titles. With the Tournament win, the team became Seattle U's first men's team to qualify for an NCAA DI tournament since March 1969 and the first to win an NCAA DI tournament game since March 1964 with a 2-1 come-from-behind win at Creighton on Nov. 21 in the First Round. He helped develop both senior forward Miguel Gonzalez, named WAC Offensive Player of the Year, and senior goalkeeper Jake Feener, who led the nation in DI saves and saves per game throughout the entire 2013 season.

In his first year back as head coach of the Redhawks, the team played in the MPSF conference, as well as taking on strong opponents such as Portland, Gonzaga, UW, and nationally-ranked UC Santa Barbara and New Mexico. Marshall Kosaka earned Second team All-MPSF honors, and Jose Merlo was recognized for honorable mention all-conference. Six members of the team received MPSF All-Academic Honors, a testament to Fewing's emphasis on academics along with athletics.

Fewing was the head coach of the Seattle University men's soccer team from 1988 through the 2005 season, when he accumulated a record of 220-125-26 (.628) during his 18 seasons at the helm. He led Seattle U to the 1997 NAIA National Championship and the 2004 NCAA Division II National Championship.

Most recently, Fewing was the head coach of the Kitsap Pumas of the Professional Development League (PDL) in 2010 and 2011, helping the Pumas win the 2011 PDL National Championship. He co-authored the book Coaching Principles for Development of Championship Teams, and he has been an analyst during the television broadcasts of Seattle Sounders FC matches.

"I am thrilled to have this opportunity to return to Seattle University," Fewing said. "My goal is to build the program to winning conference championships and competing in the NCAA Tournament." 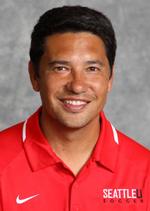 Nate Daligcon, an All-American player and top area club soccer coach, was hired as an assistant coach with the Redhawk men's soccer program prior to the 2013 season. In July 2014, Daligcon was promoted to the title of Associate Head Coach.

In 2017, the Redhawks won their third WAC Championship in the last five years and won an NCAA Tournament match for third time since 2013. Daligcon was key in SU winning 15 games, marking its fifth consecutive season with at least 11 wins. The Redhawks are one of just three Division I programs to win 11 or more games in each of the last five years.

Daligcon has played a large role in the Redhawks' surge of recent success, including a Sweet Sixteen appearance, a pair of NCAA Tournament showings, and a WAC Championship. In 2016, Seattle U went 7-0 at Championship Field, extending its home win streak to 16 games-the longest active streak in Division I entering the 2017 season.

With Daligcon's leadership, the Redhawks improved their win total by eight in 2013, going undefeated in conference play, and winning the conference regular season and tournament titles. The Redhawks also made the program's first ever appearance in the NCAA Division I tournament, defeating Creighton, 2-1, in the First Round.

Daligcon has been a head coach for several local club teams since 2004, most recently serving as head coach of Seattle United B01 Copa and G95 Copa. He led Emerald City FC G93 A to the 2005 Washington State Cup championship, plus guided two other squads to the state cup finals. He has also served as an assistant men's soccer coach at Seattle Pacific since 2009.

Daligcon was a two-time All-American at Seattle Pacific, helping the Falcons win the 1993 Division II national championship and advance to three national semifinal games as a center midfielder. He played in the A-League from 1996 through 2002, winning four league titles (three with the Rochester Rhinos, one with the Seattle Sounders), as well as the 1999 U.S. Open Cup championship as a member of the Rochester Rhinos.

Daligcon received his Bachelor of Arts degree in business administration with a marketing concentration from Seattle Pacific University, plus he holds a USSF "A" coaching license.